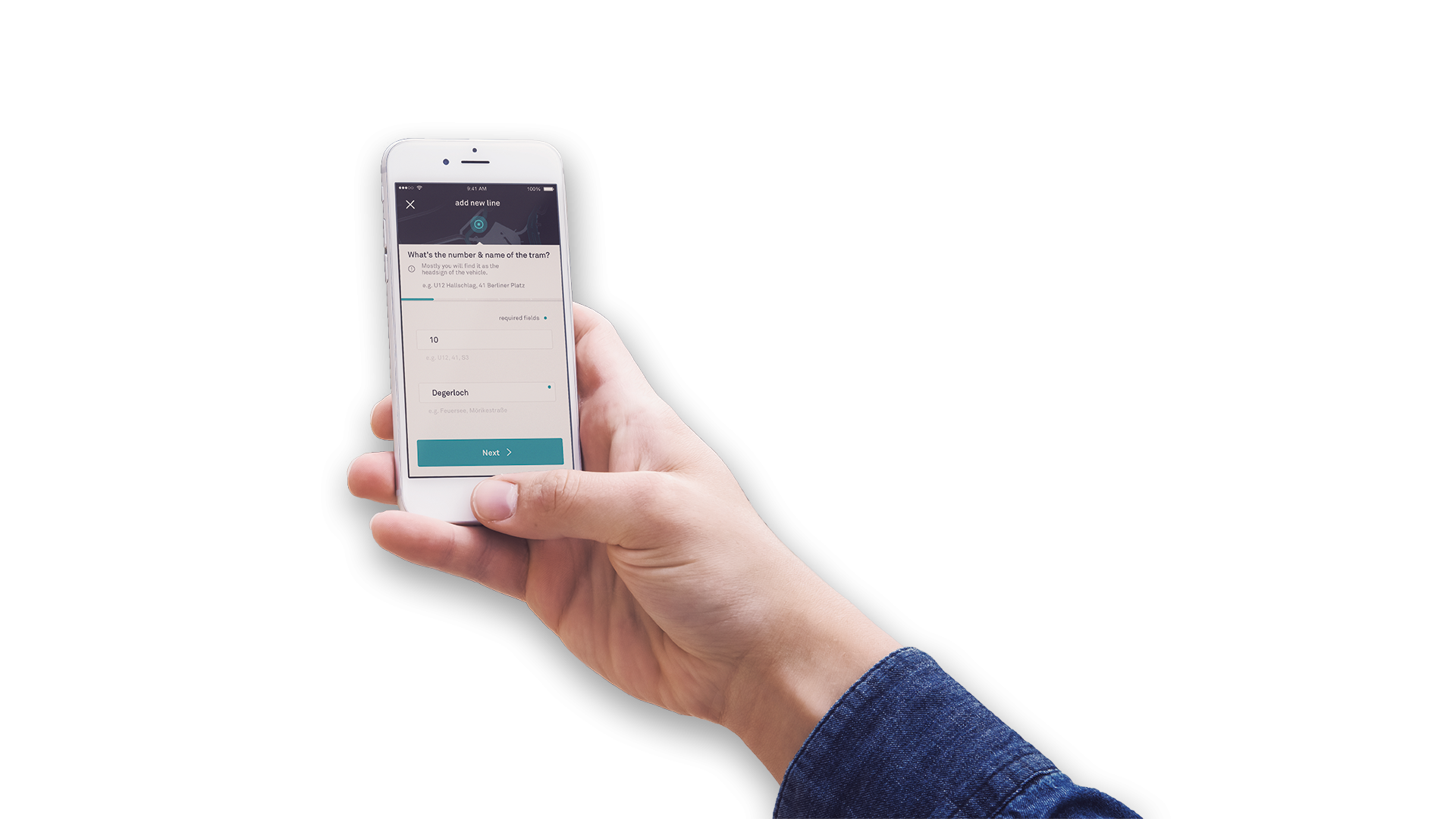 If information on public transportation was more accurate and optimised, it would become more attractive for users to switch from individual transport, such as cars. We supported a Bachelor’s thesis on the ‘gtfsedtr’, a crowdsourcing tool to generate, gather and improve GTFS data.

As part of the project, a mobile app prototype was developed by Interaction Design students, Jan Asmus and Raphael Dirr, at HfG – University of Design Schwaebisch Gmuend, Germany. The Bachelor’s thesis was done in cooperation with moovel lab during summer semester 2016.

Using the mobile app prototype, users can contribute to public transportation data and make it available to everybody. To a greater extent, this data will help to improve existing maps and mobility services. The aim was to develop an easy-to-use app that allows for automated adding of complete routes. Its functions should be easy to understand, the design of the User Interface should be task-oriented. Moreover, the app should connect users to a community that addresses questions and updates.

The central topic is the open-source gathering of GTFS data. GTFS (General Transit Feed Specification) specifies a common data format for public transportation, it once started out as a side project of a Google employee, Chris Harrelson, in 2005. The format defines public transport timetables and their matching geographical information. GTFS lists the expected schedules and routes of all public means of transport, such as subway, bus, train, ferry and more, and enables customised user routing. Its extension GTFS Realtime allows for real-time updates. Through GTFS the data can be made public to be used for mobility services, for example.

Many moovel services and applications are based on this technology. Creating a new way to interact with and improve this valuable data source is something everybody can benefit from. It is one of the building blocks of making mobility in our cities understandable for machines and digital services.

After the recent fine dust alarm the german city of Stuttgart urged its inhabitants to leave their private car at home and change to public transport instead. Public transit is an important and sustainable backbone of urban mobility. Unfortunately, information about public transport often isn’t sufficient. More GTFS data is needed. Travelers expect convenient and easy-to-use maps, route planning tools and mobility apps which rely on GTFS data. Only, how to gather more data easily?

Jan and Raphael had the idea for a crowdsourced approach through a mobile app during a workshop on how to gather GTFS data. With their prototype app, called ‘gtfsedtr’, users can actively participate in improving public transportation data. Mobility services, thus improved through the additional data, would hopefully make more users switch to public transportation pave the way for integrated digital mobility services and, in the greater picture, help protect the environment.

With this project, the students want to increase the information regarding public transport services on a global level since GTFS is used worldwide. The app aims to motivate users to generate more public information and share it openly with others. This communal effort should thus strengthen the community idea and serves everybody. Certainly, the concept of a crowdsourcing public transport data isn’t new: Existing projects, such as Mapnificent or Open Transport Net, are using open data for visualisations. For example, they show how far a user can travel within a certain amount of time.

Until this happens, Jan and Raphael propose crowdsourcing as a possibility to gather further data to improve existing services. For the users to contribute to the app, the two students integrated gamification elements as incentives alongside a community based editing for collective data quality assurance. In addition, they suggest discounts for public transport.

What you can do with the gtfsedtr app

The gtfsedtr prototype application was developed for the iPhone 6s and created using the design workflow that is also used to create other moovel apps (Balsamiq, Sketch & FramerJS) . Now how does it work, exactly? The user can choose between several functions to record routes and/or add stops. For a start, the user only needs to digitise a timetable at a stop. The app automatically adds it and makes it available to all other app users.

While on a bus or train a user can record his or her journey to add a complete route to the app’s database. The app works conveniently in the background while the users uses his smartphone. RouteRecorder also indicates the location of the expected train, bus or other means of transport in real-time. This allows user friendly recording of lines along with stop location and on the spot time stamps.

The AddStop function allows for easy manual adding of stops of the preferred vehicle. Once a stop has been added, it shows up on the map and can be further edited as StopInfo. For example, a user can add whether the stop is wheelchair accessible or whether bikes can be taken on the vehicle. Each StopInfo lists all information about this stop: the lines passing including each schedule, and the fares.

The user profile shows the stats of all routes he or she added so far. For every data entry the user receives bonus points which are collected. The more points the higher up in the community rank he or she climbs and awards are unlocked. In the community section a news feed displays the latest comments, questions and more news on the tool. Moreover, the feed shows what additions and changes have been made to new routes by which user ensuring a sense of responsibility for the data you’ve provided and a collective quality assurance.

GTFS data has many advantages. Among other, local authorities or organizations can chose whether to make their data open to the public or not. Unfortunately, today, many organizations charge for sharing their data – which can be an impediment for improving existing services. Mobility services and map providers, such as moovel, Apple, Google and many more, rely on this data and its continuous improvement. Ideally, all data would be made open to the public at some point in the future.

It was fun working with Jan and Raphael! We hope the prototype for gtfsedtr will be developed further! What are your thoughts to this project? How can open source GTFS data improve your day? Leave us a comment!

Who Wants to Be a Self-Driving Car?