From concept to rollout it took us almost a month to carpet a Smart car with a rich layer of live plants spanning over five square metres. For another month we took it on to the streets of Stuttgart, to see if we could stir up the debate about the potential for greening public spaces. 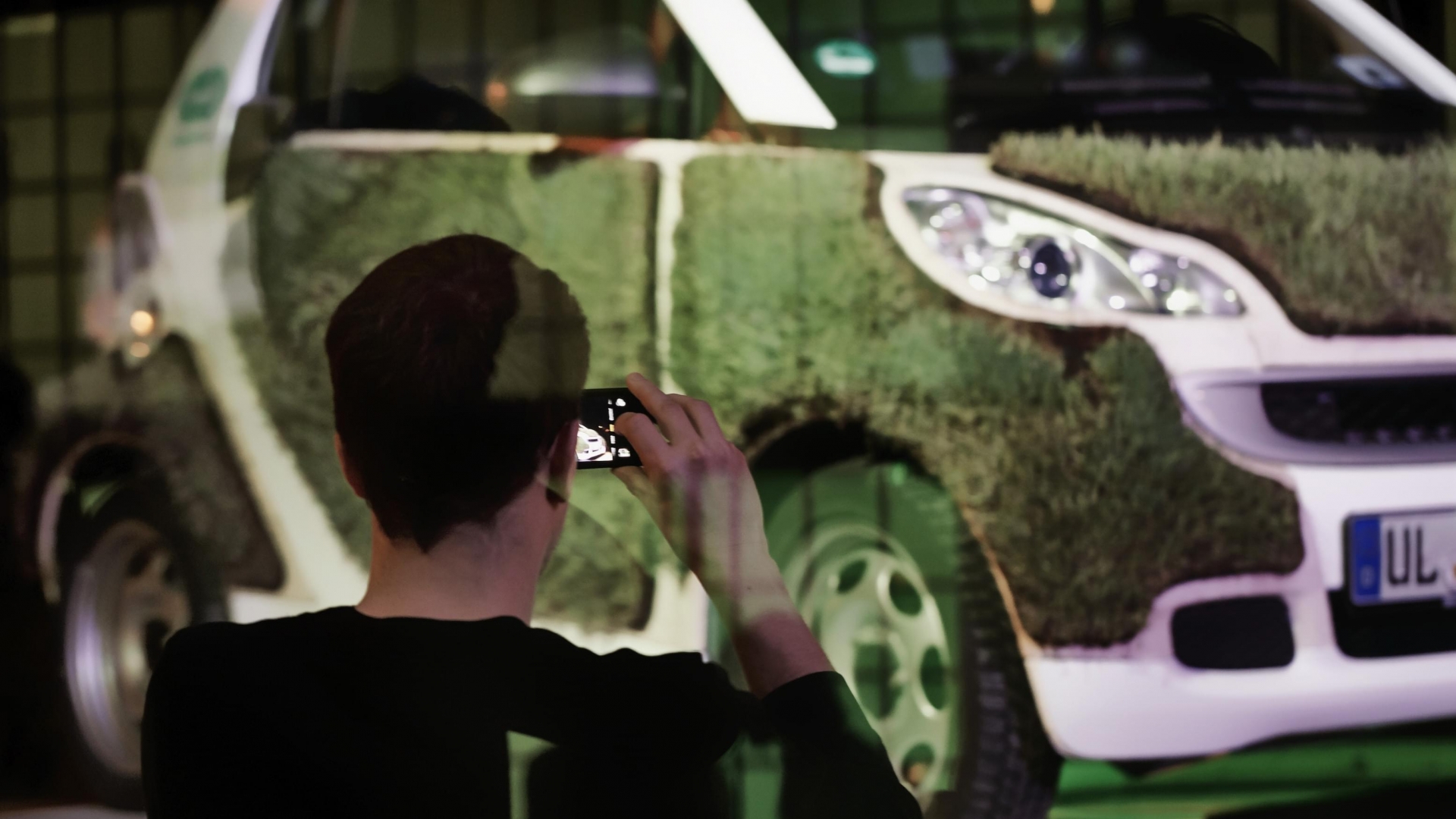 From concept to rollout

It took us almost a month to carpet a Smart car with a rich layer of live plants spanning over five square metres. For another month we took it on the streets of Stuttgart, to see if we could stir up the debate about the potential for greening public spaces.

Green rooftops and walls have been en vogue for a while. What about taking the next step and “greenskinning” a vehicle with soft grass? No kidding! “greenskin” is our project that enhances the idea of greening spaces on the move. It explores how greenery can occupy new spaces in an urban context, lying somewhere between the asphalt and the bodywork.

However this was not just about the haptic feel and the looks. The transfer to mobile greenery encompassed more than just greening the metal surface of a Smart car in a month. After we stitched the roots of the succulents on to an adhesive textile and let it grow through a mesh, we attached several layers of protective film, textile adhesive, filament, net and sediment to the car – a hybrid connection of organic material and various plastics. After completion we drove through town to get some first-hand reactions and discuss our idea.

taking our baby out for a spin

Instead of beginning a lengthy scientific study, moovel lab’s approach was to invent a prototype pretty quickly. Our aim was to spread the idea of urban greening potential, give food for thought and inspiration, and receive feedback.

For sure, a greened car can neither be the solution for all issues regarding mobility, nor can it be a substitute for urban green spaces. We rather wanted to provide a basis for discussion: what new actors can we add to the interplay between the organic city and its traffic and, at the same time, lessen the negative side effects of mobility? Our project is about the possibilities of converting, reshaping and repositioning urban space in the dimension of mobility.

“greenskin” was an experimental temporary setup. First we needed to prove that we indeed could attach a green skin onto a mobile unit. The plants on the roof, front, rear and side elements needed to brave the elements and endure sun, wind and rain. They needed to remain fixed, despite the extreme inclination of the doors.

Instead of a roof structure we decided on a kind of skin, including several layers for the plants’ roots to be interwoven. Succulent plants are particularly adapted for steep and extreme terrain. They can withstand the airstream and pollutants, and they can more easily cope with the changes in sun exposure.

Some of the different plants we used were more easily able to adapt to the mobile patch and stick to the surface than others. Interestingly enough, one plant species started to spread its shoots due to the vehicle movement. Note to self: if we try greening a Smart car again we should optimise the selection of plants.

A Windshield Washer System Including Irrigation

We underestimated just one thing: the cultivation of the succulent plants. The nurturing and daily watering was more time-consuming than expected. In a future setup we could tinker about with the windshield washer system and connect it with an irrigation system that waters the plants evenly.

Andreas Ruff, a crafter of exhibition pieces and prototypes and a collaborator of moovel lab, added: “In the next step we would need to terrace the inclined doors with gutters for the plants to be watered.” He also revealed details of the layer structure: “Eventually roots and plants added 100 kilograms to the smart’s overall weight. The proportion of sediment and the root system on one side and the plants on the other was fifty-fifty.”

Our greened Smart car was just the start! We put some thought into how we could structure the public space on the streets in new ways. Vehicles, especially the ones with bigger surfaces, tend to take most of the space in an urban environment. How about greened buses or trains? In the context of a vehicle we also thought of its infrastructure: parking spaces, bus stops, noise barriers and other roadside features would make great examples for greening. A member of the BUND (Friends of the Earth Germany) put it quite nicely: cars stand around in (plant) hostile environments like hot parking lots and dark garages - why not start there?

In fact, this green apparition was warmly welcomed over the four weeks. Most spectators seemed to be curious about when we approached. We noticed they cheered up the moment they saw the greened car driving by. Just a few looked a bit indecisive as to what to make of it. To sum it up, the Smart car had an overall positive impact on its surroundings. The surface greenery was perceived as cute and charming, and not pretentious at all.

One big part of the project was getting feedback and putting “greenskin” up for discussion. How would a greened vehicle be viewed by pedestrians?

Not Only Upstaging the Sports Car

In a similar way the media paid a lot of attention to our mobile greening experiment. The surprisingly strong response proved us right: our approach was interesting enough to further explore the setup on a larger scale. The prototype doesn’t only show “how the cityscape of the future could be shaped”, pronounced German AutoService.de. German Automobilwoche even regards the project as a future business model. Other media reactions ranged from appreciation for “a symbol for the environment”, BILD Online through a humorous perception “no more fear of damages to the paintwork”, German ZEIT online to a plant carpet as serious competition. “This Smart is an eye-catcher that initially would upstage many sports cars”, auto.de proclaims. The BBC even goes as far as to position our project in the field of biomimicry and embraces “any swatch of living, breathing green, especially in the asphalted heat islands of cities”.

We hope we can give inspiration and encourage others to find ways to make urban environments more liveable.